Rt. Rev. Julio Murray speaks about the Anglican Church in Panama, the CDSP Panama immersion Project. This is the first in a proposed series titled, CDSP Conversations, which highlights distinguished guests of the school.

Bishop Julio Muray has been setting out his hopes and vision after he was elected the new Primate of the province of Central America (IARCA). He was unanimously chosen during the province’s Sixth synod which was held in San Jose, Costa Rica. The province includes five dioceses: Costa Rica, El Salvador, Guatemala, Nicaragua and Panama.

Bishop Julio is currently the bishop of Panama – a role he will continue to fulfil – as well as interim bishop of Costa Rica. He succeeds Archbishop Sturdie Downs, who stepped down earlier this year. His installation service is expected to take place in Panama in August.

In an interview with the Anglican Communion News Service, Bishop Julio spoke of his surprise and delight at being chosen for the role and said he thanked God for the opportunity to serve as the province’s ‘chief pastor’. Looking ahead, he pledged to continue what he called ‘kingdom business’ across the province. 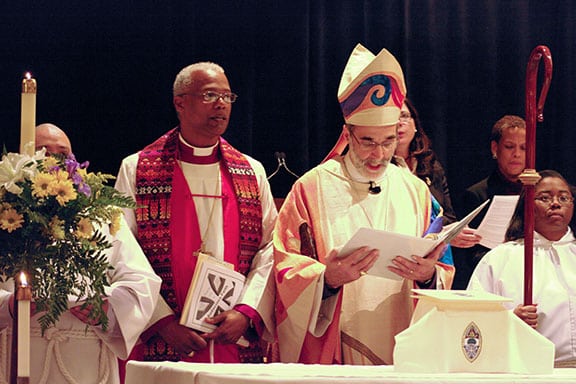 “We are a vibrant church. We are a small church but we are well respected (in society). We have been called several times to be part of conflict resolution – so we are taken seriously. And we are an inclusive church – we want to be a church that walks with those who have historically been excluded. We want to work with people who are usually excluded from the table where decisions are made – so that they can have a voice.”

Bishop Julio said Anglicans across the province had made a significant contribution in areas such as education, human rights, migration and in working with farmers and with indigenous groups. He said he was committed to seeing such work continue.

“One of the most important resources that any church has is the people. People in the Episcopal Church in Central America see themselves as church that offers others the opportunity to experience God – the God of transformation.

“Our countries have been countries of hope for the longest time. The hope and the resilience of the people is what has been carrying us through. That’s where our optimism comes from – our hope in the Risen One. We know who holds our future.”

Member of YouthQuake, an ecumenical theater group that produced the annual Easter Drama Cantatas from 1978-1989.