Lloyd Barrington La Beach (June 28, 1922 – February 19, 1999) is a former sprinter from Panama, who won two bronze medals at the 1948 Summer Olympics, the first Olympic medals for Panama. He also competed in the long jump.

In the 100 meters, he finished behind Harrison Dillard and Barney Ewell for third place, ahead of favorite Mel Patton. 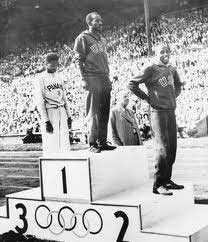 Born in Panama City, his parents were Jamaican immigrants. While Lloyd was still in school the family relocated to Jamaica, where La Beach first showed his talent in athletics. He later entered the University of California in Los Angeles, where he was coached during his preparations for the Olympic Games.

In 1948, he set the world record in the 200 meters on a cinder track in Compton, California. After the race, he was described in Time as "Panama's one-man Olympic hope."[2] Just a few weeks before La Beach had been involved in a world record setting 100 yard dash, in which he barely lost at the finish line tape to Patton. These 1948 performances made him one of the expected medal contenders against Patton and Ewell in the Olympics.

Lloyd La Beach retired from athletics in 1957, and died in a New York City hospital.