Mariano Rivera (born November 29, 1969) is a Panamanian baseball pitcher who has played 19 seasons in Major League Baseball (MLB) for the New York Yankees. Nicknamed "Mo", Rivera has spent most of his career as a relief pitcher, and has served as the Yankees' closer since 1997. A 12-time All-Star and five-time World Series champion, he is MLB's career leader in saves (636) and games finished (927). His accolades include five American League (AL) Rolaids Relief Man Awards and three Delivery Man of the Year Awards. 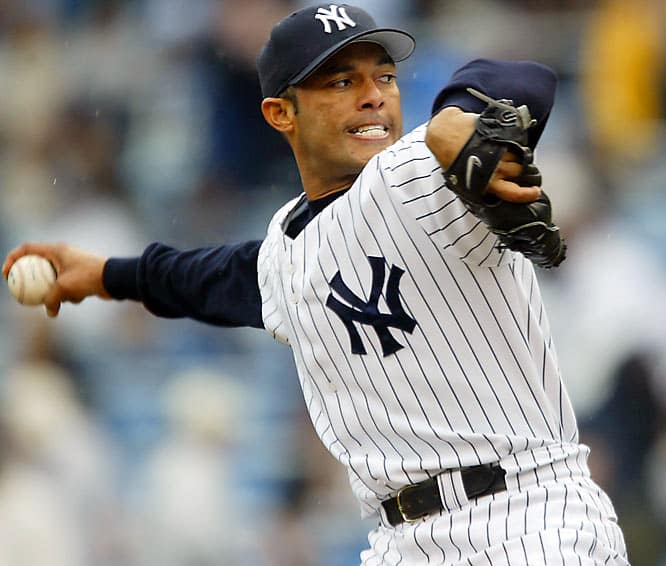 Rivera was signed by the Yankees organization in 1990 as an amateur free agent in Panama, and he debuted in the major leagues in 1995. Initially a starting pitcher, he was converted to a relief pitcher late in his rookie year. After a breakthrough season in 1996 as a setup man, he became the Yankees' closer in 1997. In the following years, he established himself as one of baseball's top relievers, leading the major leagues in saves in 1999, 2001, and 2004, and finishing runner-up for the AL Cy Young Award in 2005. With his presence at the end of games to pitch the final innings, Rivera has been a key contributor to the Yankees' success in the late 1990s and early 2000s. An accomplished postseason performer, Rivera was named the 1999 World Series Most Valuable Player (MVP) and the 2003 AL Championship Series MVP, and he holds several postseason records, including lowest earned run average (ERA) (0.70) and most saves (42). His pitching repertoire consists primarily of one pitch, a sharp-moving, mid-90s mile per hour (mph) cut fastball that has been called an all-time great pitch.

Rivera is regarded by baseball experts as one of the most dominant relievers in major league history. Pitching with a longevity and consistency uncommon to the closer role, he saved at least 25 games in 15 consecutive seasons and has posted an ERA under 2.00 in 11 seasons, both of which are records. His career 2.19 ERA and 1.00 WHIP are the lowest marks in baseball's live-ball era. On the field, he is well known for his composure and reserved demeanor that contrast with the effusiveness of fellow closers. Away from baseball, he is involved in charitable causes and the Christian community through the Mariano Rivera Foundation. Rivera is considered to be a strong candidate for the Baseball Hall of Fame once he is eligible.