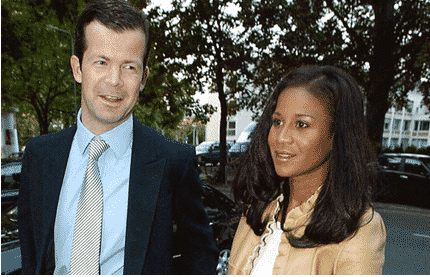 Princess Angela was born in Bocas del Toro, Panama as Angela Gisela Brown, the daughter of Javier Francisco Brown and Silvia Maritza Burke. She is of Afro-Panamanian descent. After having finished primary school and high school in New York, Brown studied fashion at Parsons The New School for Design, where she was awarded the Oscar de la Renta Gold Thimble Award. She worked for a fashion designer in New York and started her own label (A. Brown), but sold her practice after three years. She then worked for Adrienne Vittadini, an U.S. fashion designer, where she was a fashion director until September 1999.

On 29 January 2000, at 11:00 am, she married Prince Maximilian of Liechtenstein at the Church of St. Vincent Ferrer in New York City. The couple met a few years earlier in New York at a reception and became friends. The bride wore a white dress that she designed. The same Kinsky tiara that Princess Tatjana wore when she married Philipp von Lattorff in June 1999, held her veil. 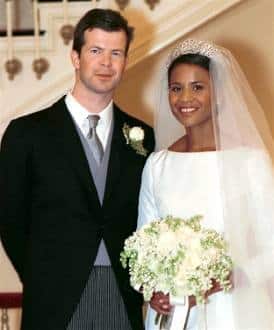 Present were Reigning Prince Hans-Adam II and his wife Marie, Hereditary Prince Alois with his wife Sophie, Prince Constantin with his wife Marie and Princess Tatjana with her husband Philipp von Lattorff. The other guests were mostly family and friends of the couple.

Prince Maximilian and Princess Angela have one child.