Roberto Durán Samaniego (born June 16, 1951) is a retired Panamanian professional boxer, widely regarded as one of the greatest boxers of all time. A versatile brawler in the ring, he was nicknamed "Manos de Piedra" ("Hands of Stone") during his career. 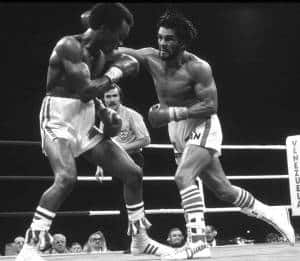 In 2002, he was chosen by The Ring to be the 5th greatest fighter of the last 80 years. Bert Sugar rates him as the 8th greatest fighter of all-time and the Associated Press voted Duran as the #1 lightweight of the 20th century.[3] Many even consider him the greatest lightweight of all time. He held world titles at four different weights—lightweight (1972–79), welterweight (1980), light middleweight (1983–84) and middleweight (1989). He was the second boxer to have fought a span of five decades, the first being Jack Johnson.

He finally retired in January 2002 at age 50 (having previously retired in 1998) following a bad car crash in October 2001, with a professional record of 120 fights, 104 wins with 69 KOs. Up until the second Ray Leonard fight, he was trained by legendary boxing trainer Ray Arcel.