Rodney Cline "Rod" Carew (born October 1, 1945) is a former Major League Baseball first baseman, second baseman and coach of Panamanian descent. He played from 1967 to 1985 for the Minnesota Twins and the California Angels and was elected to the All-Star game every season except his last. In 1991, Carew was inducted into the National Baseball Hall of Fame. While Carew was never a home run threat (only 92 of his 3,053 hits were home runs), he made a career out of being a consistent contact hitter. He threw right-handed and batted left-handed.

Carew is a Zonian and was born to a Panamanian mother on a train in the town of Gatún, which, at that time, was in the Panama Canal Zone. The train was racially segregated; white passengers were given the better forward cars, while non-whites, like Carew's mother, were forced to ride in the rearward cars. When she went into labor, a physician traveling on the train, Dr. Rodney Cline, delivered the baby. In appreciation for this, Mrs. Carew named the boy Rodney Cline Carew.

At age 14, Carew and his family immigrated to the United States and settled in the Washington Heights section of the borough of Manhattan, New York City. Although Carew attended George Washington High School, which MLB star Manny Ramirez also attended, he never played baseball for the high school team. Instead, Carew played semi-pro baseball for the Bronx Cavaliers, which is where he was discovered by Minnesota Twins' scout, Monroe Katz (whose son, Steve, played with Carew on the Cavaliers). Katz then recommended Carew to another Twins' scout, Herb Stein, who along with Katz signed Carew to an amateur free agent contract (at the Stella D'Oro Restaurant in the Bronx) on June 24, 1964. 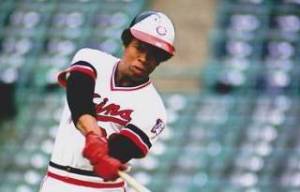 Starting his minor league career, Carew was assigned to play second base with the Melbourne (FL) Twins in the Cocoa Rookie League and hit .325 over the final 37 games of the season. Promoted to the Single-A Orlando Twins in the Florida State League the following season, Carew hit .303 with 20 doubles, eight triples and one home run. Carew would spend the 1966 season back at Single-A, but this time with the Wilson Tobs in the Carolina League.

Carew moved to the community of Anaheim Hills, California while playing with the Angels and remained there after his retirement.[12] Carew was hired as the Angels hitting coach on November 5, 1991 and served in a similar capacity with the Milwaukee Brewers. He is credited with helping develop young hitters like Garret Anderson, Jim Edmonds, and Tim Salmon. Carew has also worked at various times as a minor league and spring training hitting and base running coach for the Twins and serves as an international youth baseball instructor for Major League Baseball.